skip to main | skip to sidebar

i just got my wisdom teeth out

Let it be known that Kat is no waif. I know, considering the amount of time I spend blogging on food instead of fashion like I am supposed to be doing, you are shocked. But it is true. I'm probably, like, a size 7 or 8? I don't really care to check. But anyway, I'm totally proud to be non-thin. A lot of women say that, but I'm pretty sure I mean it. That's not to say that I don't have days where I hate my thighs and whatever, because I definitely do.
Anyway.
American Apparel is perplexing me lately.

It seems to me that this girl is missing something. That would be meat. On her bones. And a butt.
It's just weird that AA shoves the sexiness of its clothes down our throats, and then their models are reed-thin. I don't find that sexy, and I don't think many other people do. That's all.
But hey, it's okay to be skinny too. I used to be. And then I discovered cheesecake, and well, my thighs didn't really stand a chance after that, but it was nice while it lasted.
written by... Kat at 11:33 AM No comments:

I don't think I've yet mentioned my love for Paula Deen. I think she is adorable, hilarious, and I really want to come over to her house and have her make me fat.
So, I figured, why don't I combine my two favorite things, food and fashion?
Ladies and Gentlemen, I give you Paula's Best Dishes.
Lemon Basil Chicken Salad

lemon basil chicken salad by artykat featuring Marchesa dresses
Obviously here the dress is the main part of the dish, and the shoes and jewlery are the macaroni noodles. The coat is the lettuce.
"We Need To Talk" Chocolate Pizza

"we need to talk" chocolate pizza by artykat featuring Bottega Veneta
I'm pretty sure nobody would actually wear this outfit, but oh well. Anyway, the blouse is the marshmallows, the skirt is the chocolate bits, and the accessories, which are the real fun here, are the M&Ms.
Pot Roast

pot roast by artykat on Polyvore.com
This one was my favorite to make. I love it. I had Katy Perry in mind the whole time. The brown romper is the meat and gravy, and the accesories and shoes are the pink of the inside of the beef. The jacket, which I'm not wild about, but oh well, was meant to represent the garnish on the side.
Never-Fail Pound Cake

pound cake by artykat featuring Christian Louboutin shoes
I am pretty sure these shoes don't go with the outfit. Hmm. Anyway, the dress is the cake. The shoes and jewlery are the berries. The cardigan is this berry sauce that I'm pretty sure was in the episode but not in the picture, and the umbrella, of course, is the whipped cream. Inevitably, I'm hungry now, so I'm off for some lunch.
written by... Kat at 9:12 AM 2 comments:

please do this for me. please, please...please.

Like what you see?
Then PLEASE visit my Flickr page and leave me some feedback.
http://www.flickr.com/invisiblebuttons
It's not all boring nature pictures, I promise.
written by... Kat at 10:38 AM 2 comments:

Labels: shameless self-promotion
written by... Kat at 9:47 AM 1 comment:

The new Yeah Yeah Yeahs album It's Blitz! seems like a bit of a departure from what they usually do. I haven't been a fan for very long, and really, I still haven't gotten over "Maps", but this seems more electro-ish. Which is never something that's been wrong for me personally. First let's just talk about the B.A. cover for just a sec. When I first saw it I had no idea what the heck was going on. I thought she was holding some sort of lamp that expelled water. Then I realized it was a photo of an egg being owned. And I thought it was awesome.
Anyway, the song "Heads Will Roll" is obviously an instant classic. I was sitting in the car with my friend Laura, and I said to myself (well, not as much to myself as to Laura), "I have got to get this album."
It opens with the sultry, spooky "Zero", a less dancey version of "Heads Will Roll". It is vaguely reminiscient of The Killers' "Human", and I think this new techno-infused art rock is a new kind of trend. And I like it.
However, other than the two tracks I just mentioned, none of them really jump out at me. Maybe it's because I'm notoriously hyper and have never been able to properly enjoy more downtempo tracks. Whatever the case may be, I can point out "Skeleton" and "Soft Shock" as two other tracks that I really ended up liking. Overall I'd give this album a three out of four.
written by... Kat at 9:51 AM No comments: 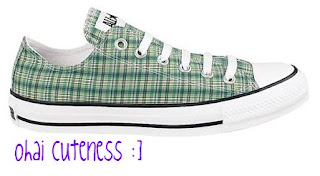 This is a Converse sneaker. Its name is Fonsworth. It likes golfing, tea, being on yo feet, and UH BEING TOTALLY AWESOME HI.
written by... Kat at 9:49 AM No comments:

people i wish i was as cool as